Comic-Con is not just about comic books anymore. That feels like a loss — and a win

Comic-Con is not just about comic books anymore. That feels like a loss — and a win

With custom-built pop-ups that mirror scenes from movies and high-rise hotels transformed into giant billboards for upcoming TV shows, Hollywood looms large in the heart of San Diego’s Gaslamp Quarter during Comic-Con.

Officially referred to as Comic-Con International: San Diego, this year’s event, which commemorates the convention’s 50th year, will run from Thursday to Sunday (with a Wednesday night preview) and is expected to once again attract at least 135,000 comic book and pop culture enthusiasts in and around the San Diego Convention Center.

Attendees will have a chance to test their potential as police recruits at a “Brooklyn Nine-Nine” experience, learn how to throw axes at a “Vikings”-themed training day and even get a taste of “Snowpiercer”-branded bug protein bars. Fans more interested in Comic-Con’s programming will have a chance to catch Marvel Studios and “Game of Thrones,” routine headliners who sat out last year’s convention, as they make their return to the venerable Hall H.

The show’s transformation into what it is today is emblematic of the evolution of comics and genre fandom over the years. The changing attitudes about comics and comic-book-based entertainment have given rise to a multitude of ways for all kinds of fans to celebrate what was once a niche form of storytelling.

“We were four teenagers, one preteen and an unemployed graphic artist. And we started this thing, Comic-Con,” said Mike Towry, one of Comic-Con’s teen founders. “We did it because we wanted to do it. We weren’t trying to make money from it. We just did it for the fun.” 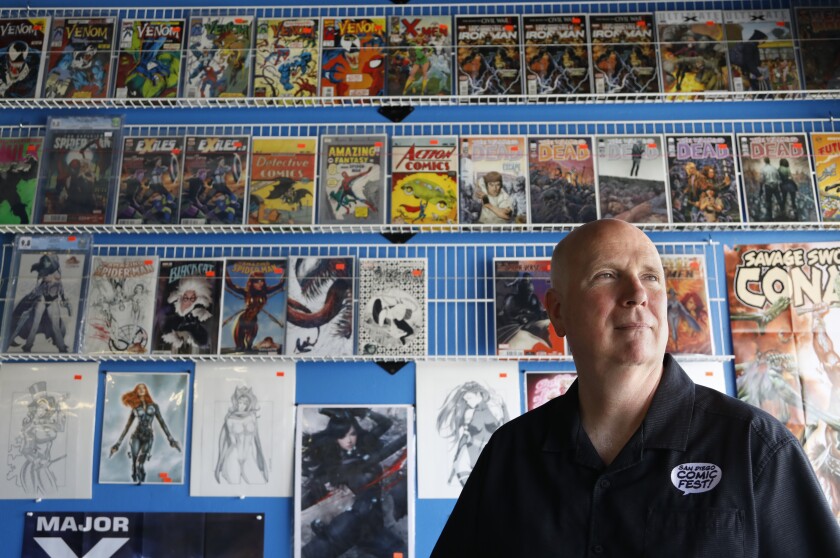 The original organizers — Towry, Dorf, Richard Alf, Bob Sourk, Barry Alfonso and Dan Stewart — put together the one-day San Diego Golden State Comic-Minicon in March 1970 at the U.S. Grant Hotel. Its success led to a three-day convention that August, which boasted 300 attendees plus comics great Jack Kirby as well as author Ray Bradbury among its guests.

The early shows were “all about [comic book] collectors,” Bud Plant, a longtime Comic-Con exhibitor, recently told the Los Angeles Times. “We were there both to sell some of our duplicate things that we picked up and also to go out and scout for comics. It was all about back issues of comics going back to the 1940s. I probably spent as much time out looking for books as I did selling them.”

At the time, comics fandom was primarily about buying and reading comics and fanzines, and fans were frequently looked down on as immature by mainstream culture. Comic-Con then was a gathering place where comic and sci-fi fans could engage with like-minded people and meet some of their favorite creators.

As culture changed, Comic-Con became a place where comic books, TV shows, movies, books, toys and other interests naturally coexist, and the convention evolved away from its origins.

For Plant, whose business grew right alongside Comic-Con, the evolution meant finally deciding to stop exhibiting at Comic-Con after 48 years. He sat out the 2018 show after coming to terms with the diminishing returns and logistical difficulty of exhibiting.

“It was really, really a tough decision. It took me a couple years to come to it,” said Plant. “San Diego is the Comic-Con as far as we were concerned. I loved the show, and it had become the mecca for comic book fans.”

Despite his booth being a marquee attraction on the exhibit floor, Plant couldn’t ignore the fact there were fewer people interested in books attending the show. But though sad about how the show has changed, he’s come to accept Comic-Con for what it is.

“I’m at peace with how it’s changed,” said Plant. “I mean, it’s certainly good for a lot of people and it’s good for comics in general to have it become so famous.” 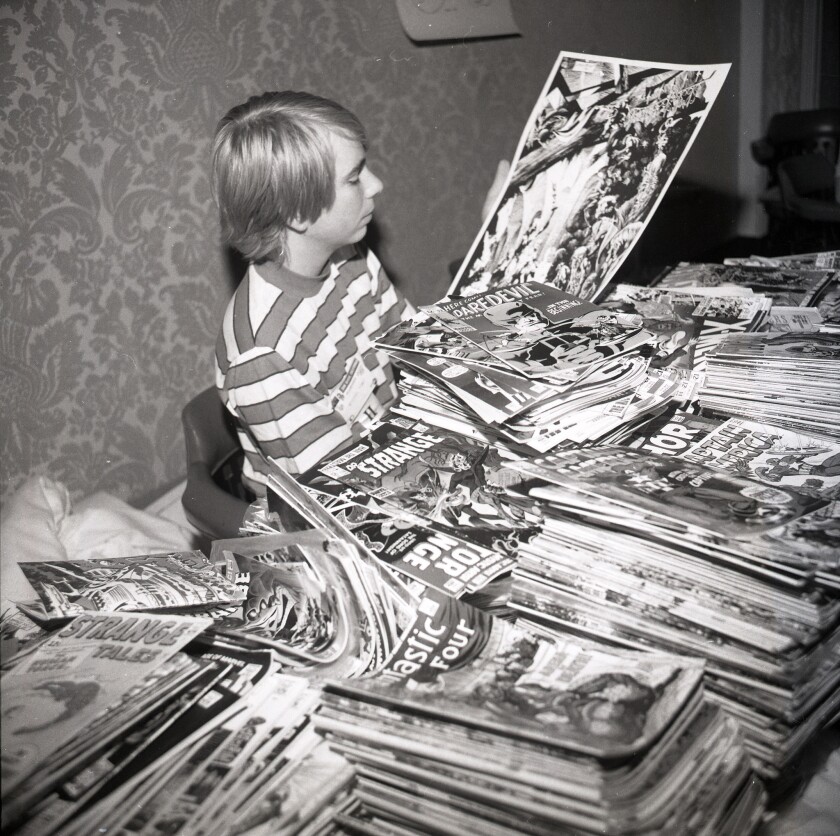 This shift has opened up Comic-Con for all kinds of pop media, but the current organizers say that doesn’t mean comic books are not important.

“I believe all art forms have an important place at our show, particularly comic books,” said Comic-Con International spokesperson David Glanzer over email. “When Comic-Con first began we focused on areas of entertainment that many people didn’t feel were art, [including] comic books, movies and science fiction/fantasy literature.

“Things have changed a great deal in 50 years, and it is still as important as ever to highlight the artistic and expressive elements that make these forms of art so unique,” he added.

Where the focus was once devoted to comic books themselves, the show now caters to a culture of fans who want to be in the room when major Hollywood studios make big announcements or debut footage from an upcoming movie.

“We always strive for a diverse event. We are fans ourselves and try to put on the type of show we would like to attend,” said Glanzer. “The diversity of the floor and of the programming makes our event special. The ability to highlight different opinions and different forms of art is valuable for our attendees.”

That said, exhibitors such as Brad Sloan of FVF Comics can’t help but feel the squeeze from Comic-Con’s approach.

“The only thing that hurts the business is the exorbitant overcharging and super high-density crowd at San Diego,” Sloan told the Times. “Us little guys are being forced out of Comic-Con. We would much rather them split us up and give us three or four days as a comic vendors show again.

“The people that buy comic books do not want to fight the crowds there,” he added.

Sloan understands that some fans are excited about Comic-Con’s Hollywood embellishments and fully supports their attendance. But he hopes that a sort of comic-book-only “prelim to Comic-Con” could be a way for the show to still celebrate its roots.

Even current comic book fans vary in their opinions about how Comic-Con has changed over the years.

On a recent afternoon at Long Beach’s Pulp Fiction Comics, one customer waved off any concerns about crowd size.

“It’s more fun” that there are crowds, said Moises Soria, 30, of Lynwood. For him, Comic-Con is a chance to check out artists and panels for upcoming shows and movies.

“I usually buy most of my things at the artist alley,” said Soria. “I like supporting local artists and buy posters, books, prints and shirts.”

But Rigo Rivera, 37, of South Gate said he hadn’t gone to Comic-Con in years because it was overcrowded.

“It started moving away from comic books and focusing more on big Hollywood blockbusters and stuff,” said Rivera. “I didn’t feel it was about comic books.”

He added: “Comic-Con is like the Coachella of comic books. I’d rather go to the local conventions because it’s a lot easier to meet the writers and the artists that I admire.” 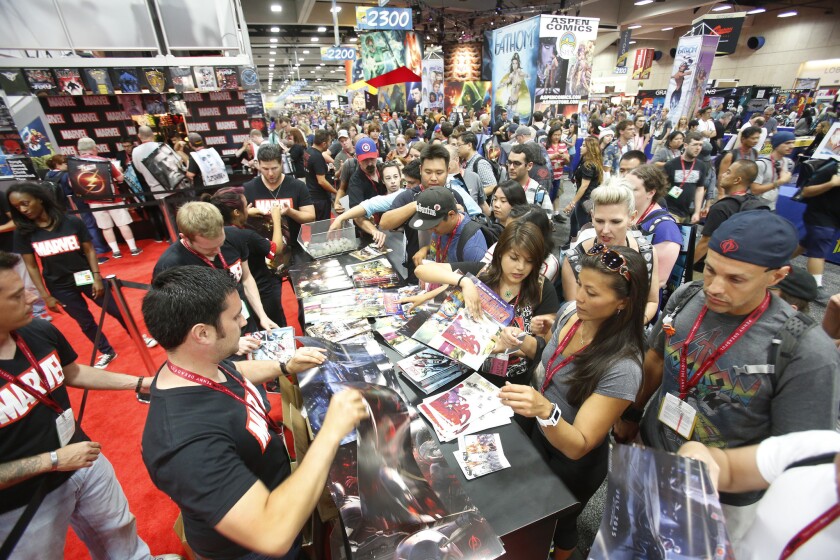 Fans gather at the Marvel booth at Comic-Con 2014 for free posters during preview night.

Despite the event no longer being just about comic books, Towry pointed out that there is still quite a comic book presence at Comic-Con.

“If you eliminated everything but just the comic programming that’s at Comic-Con, it’s still a huge comic convention,” said Towry. But, knowing some people miss how the shows used to be, he helped launch an event to try to capture the spirit of Comic-Cons past. Dubbed San Diego Comic Fest, the event will hold its eighth edition in March.

To an extent, the massive scale of Comic-Con helps the success of these smaller shows. Fans who can’t or won’t attend the flagship SDCC are among those who attend these smaller comic book conventions.

Like Plant, Towry sees Comic-Con’s growth as a win for comic books.

“I got into comics when everybody’s moms were still throwing their comics in the trash,” said Towry. “When we started Comic-Con, nobody in Hollywood was interested in us. We were just a subculture that was small and not well thought of. And to see it kind of having conquered popular media now, it’s just amazing.”